Get a glimpse into the Truck Driver Life

American truckers have a unique perspective on life. After all, they live both on – and off – the road. They see parts of our country that few people do, and they experience things that few people ever will. And whether you're thinking of becoming a truck driver, have a family member who drives a truck for a living, or just want to learn more about the life of a truck driver, our drivers are ready to show you their world.

With blogs and videos covering everything from life on the road to some of the weird and wonderful things they've seen along the way, they're here to pull back the curtain on what being a truck driver is really like, so you can get a glimpse of the CDL life.

Prior to coming to Swift, George worked in the transportation industry for 18 years, but in a management position for a company in Hawaii. He moved to Arizona from Hawaii, so he had only been to California and Nevada at the time.

During his time in OTR, he was able to go to 45 states! Some of his favorite places to see were New York and San Francisco, where he rented a car to go into the cities. Outside of driving, he loves surfing, fishing, and snowboarding. He also pilots a motorcycle - a 600 horsepower turbo Suzuki!

George admits at some points when he was starting off he thought, "This isn't for me." However, he now feels comfortable and confident in his skills as a driver. He wants other new students to not give up and to be able to reach out to him if they need help or advice.

It's for this reason George is very active on our Swift Driver Facebook group, offering advice and weighing in when he can. We love to see experienced drivers supporting the next generation.

Take a good look at Miss Sherry, cause you just might miss her once she takes off! Sherry is our resident marathon runner and inspiration, with a colorful resume of several annual marathons and races, including the Boston Marathon in 2019 and a run across the country in early 2021.

She's kind of a big deal! And we couldn't be more proud (and jealous) of her skills and commitment. In addition to being an all-around rockstar and athlete, she is also an amazing Dedicated Driver at Swift. She has a unique account she is on - it requires a live unload! She touches every box that comes out of the truck.

She said, "I get paid to do my core workout several times a week. It's amazing!" She also enjoys having consistency from her dedicated account. She always knows what she is going to be doing, which means she can plan her life and her runs to keep active! 🏃‍♀️

Recap her journey across the US on the Facebook page https://www.facebook.com/runsherryrun2021/ Congratulations to Sherry on completing her run across the United States from Santa Monica Beach to Coney Island! We're so proud of her and her amazing accomplishment. #RunSherryRun

Meet Devon P., a Driver who's always willing to lend a hand! He's been driving with Swift for 3.5 years. He loves being OTR because he gets the chance to travel - in fact, he's been to nearly every state in the Lower 48, minus a few in the Northeast.

In his downtime, he likes to get a rental car or Uber to explore the new cities he gets to visit. Miami and Salt Lake City have been some of his favorite places to explore! Beyond driving and traveling the country, he enjoys gaming on the truck. Some of his favorites? Simulation games, including American Truck Simulator, because of the challenge.

Devon is also a helpful, positive person. He said, "I feel that in trucking, we should all stick together. Truck drivers are a family, especially here with Swift." Out on the road though, he doesn't see another company, he sees other drivers who need a hand, and he's always willing to be there to help.

Meet John A - a veteran who loves being on the road with his doggo co-pilot Dashcel! John spent 4 years in the Marine Corps and 7 years in the Navy.

His favorite duty station was Norfolk, VA because that's where he met his wife. He feels that the importance put on safety has been a great transferrable skill to trucking from his time in the military.

He also loves spending time with his dog Dashcel who is with him on his truck. John got Dashcel from a rescue and learned that he had been locked by himself inside of a house. Now, Dashcel is an emotional support dog to John and gives him happiness & love on the road.

Meet Sara D., a friendly and supportive driver at Swift! Prior to coming into trucking, she worked in schools. She wanted to go into a new career and jumped right into the new opportunity. Now, she's been working for Swift for a year and half!

Sara likes to try different things on her truck. She has a bike with her so she can take advantage of different trails she sees while out on the road. Pennsylvania and Ohio were some of her favorite places to bike so far - coming from her home state of Nevada, she appreciated the woods and trees!

She's also enjoyed dabbling in different foods to make on her truck. One thing she made was a vegetarian poke bowl with avocado, edamame, rice, cucumber, lemon, and cilantro - yum!

One of our favorite things about Sara is that she is so supportive of other drivers out on the road - she said, "As I'm getting to know more drivers through our Driver Group on Facebook and getting to know my terminal more, we really are a family!"

We love our Drivers, especially when they have a great personality like Terri S! She's been with Swift for 9 years, has over 1 million miles, and is a Diamond Driver.

She loves staying safe and getting her deliveries on time out on the road. She even refers to herself as a "Slow Roller" because she takes so much pride in safety. She initially started her career with Swift and said "Now it's home."

She's proud to have accomplished her two goals of becoming a Diamond Driver and a Million Mile Driver and is looking forward to doing even more! Outside of driving, one of her favorite restaurants is Theo's, a Greek/Italian place near Greer, SC. Her recommendations for food? Fried chicken, spaghetti, or the Greek salad (but she says you should try it all!).

While she doesn't listen to music often on the truck, she enjoys classics like Smokey Robinson and other old groove music that keep her moving down the road.

Ricky's a Marine veteran. When he first started, he was infantry, and then was combat support and logistics. Some of his favorite bases during his time in the military were Camp Butler in Okinawa and Camp Lejeune.

He said that the discipline he learned in the military was helpful to his trucking career. Beyond having over 2 million miles with Swift, he's also been a mentor for nearly 20 years. He said he enjoys teaching people on passing on knowledge to young people getting into the industry.

Being at Swift for so many years, he really appreciates the team that helps him to do his job and support his career. Ricky said he knows he can call and get the support he needs from the crew at Swift!

Meet Summer F, who gets to experience being both a Driver and an office employee at Swift! She originally started as a driver at Swift. While talking to some of the office staff, she realized that she could work in the office while also being a Casual Driver.

She first started as a Driver Leader but now works in ECT. She feels like since she has been both in the office and on the truck, she can better understand the frustrations or concerns that Drivers may have when they call in.

As a Casual Driver, she doesn't drive as much but does need to drive within 90 days. She said that she tries to drive as much as possible though! She loves the thrill of driving a big vehicle and constantly learning new things from other drivers she meets on the road.

Summer actually first got into trucking because someone she knew told her that she wouldn't be able to do it. She didn't want anyone telling her what she could or couldn't do, so she got her CDL and started driving.

Her advice to other women considering driving is "Do it! Just do it because you're fearful of it. Once that fear shakes off, you're going to be good."

Our drivers have lived many lives and accomplished so much, it’s incredible! Tina Y. was once an academic, having earned a Masters Degree from Berkley. In between hitting the books and hitting the road as a trucker, she used to own her own land, farming pheasants! Tina is a jack of all trades, and we love that for her.  Throughout her life, she has shown that women can be successful in any field! When asked whether women should consider the trucking industry, she said, "It's absolutely amazing. People are really encouraging and willing to help if you need it."

Driver Lori S. is a legendary Driver at Swift - she’s been driving for our company for over 31 years and well over 3.5 million miles!

Driver Leader Danielle Booher said, “She has trained many drivers at Swift and has continued to inspire each and every person that she comes into contact with. She is the most genuine, funny, and enthusiastic person many of us have ever met in our lives.”

Lori loved getting to train fellow women on the truck. She said, "Once they found that they too could drive a truck, they would sit up straight, put their shoulders back, and just become so confident. I always enjoyed seeing my students go through that process!"

When Lori first started in the industry, women made up about 5% of Drivers, and now that number is over 10%! We have no doubt Lori helped to increase that number with her friendly attitude and conversations about driving with other women. She’s even involved in an organization to encourage and support minority women as they become Drivers. 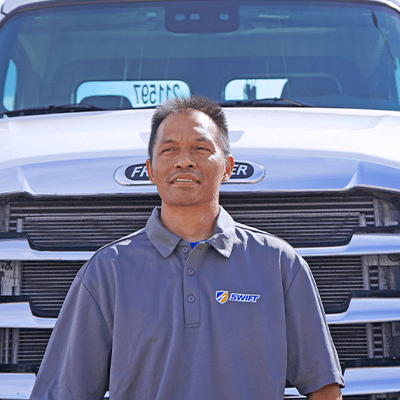 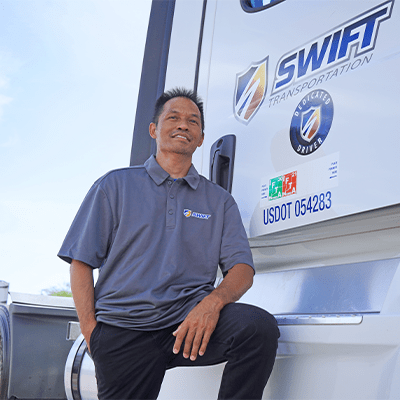 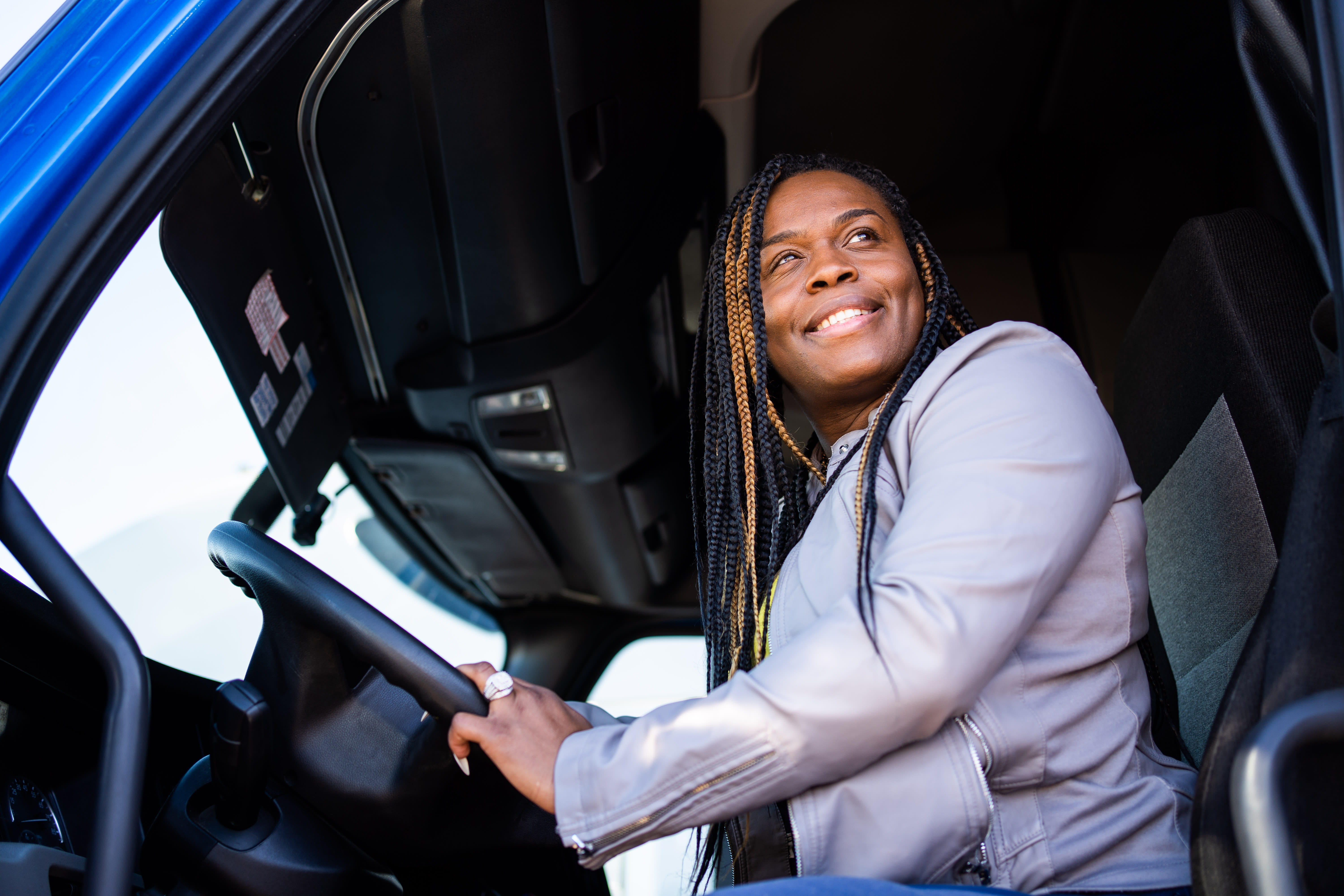 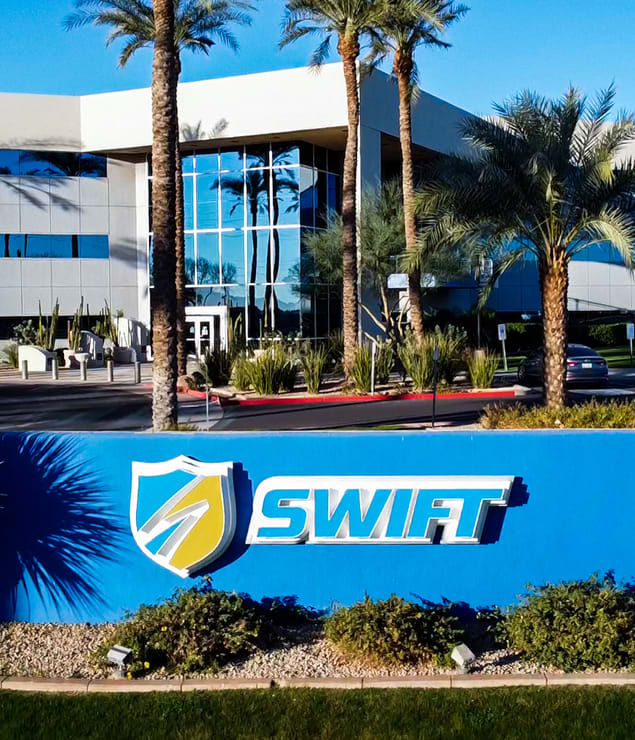 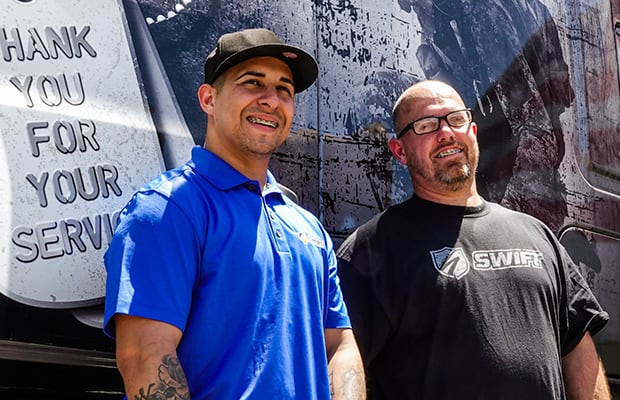